With your mind saturated with horrors from your caretaker, venture to the depths of your nightmares to overcome your fears.

Lucid Dream the 4 Layers of your Labyrinth to reach the end. Each layer gets progressively more difficult and is meant to test your knowledge of the games mechanics. Collect/duplicate items, find powerful weapons, and use gear to conquer your Labyrinth.

Fists, Swords, Karambits, Hammers, and Spears. Out of these, players will be able to find a weapon that suits them the most. Each of the weapons are unique in their own ways, and diverse enough to keep combat fresh and engaging.

Oneiro allows your creativity to shine at any given moment, and nearly every object and mechanic have multiple purposes. You may want to go right up to an enemy to fight them; or perhaps you’ll want to use throwing knives to destroy a nearby wall and collapse the ceiling onto them; maybe you’ll break through the ceiling and attack them from above.

The Power Behind Items

Items are normally found through treasures, and they play a major role in Onerio by improving the players stats, or granting new abilities. All items can be stacked to multiply their effectiveness, as well. If the player wants to focus their duplications and have 10 midair jumps, or regenerate 20% of their life every 10 seconds, or even causing enemies to explode in a large radius upon death; nothing is stopping them from it. 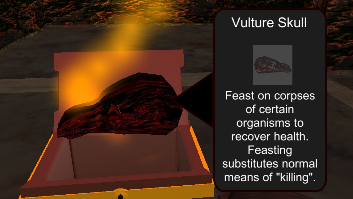 The "Rogue" Aspects of Oneiro

There is no progression in regards to gameplay. The only thing that’ll change between your 1st run and your 100th run is your knowledge and skill with the games mechanics and systems. There are no permanent upgrades, nor anything that will persist between runs.

This game is meant to be difficult but fair, and despite the Labyrinth being randomly generated with each run, you’ll notice some subtle patterns and some tricks to help you get around the labyrinth quicker and safer in your future runs. This "learn-and-adapt" loop is what separates a new player from experienced players.

Parents have resorted to telling their children horror stories to keep them in check. If a child messes up, they’ll formulate a horror story and direct it towards the child specifically. Despite being considered inhumane in some eyes, these parents saw it as a solution to their children’s behaviors; ignorant to the psychological damage they were causing them.

These children eventually find themselves at The Island- a remote location thousands of miles to the nearest shoreline. The victims stay at this island until they get over the fears that their caretakers gave them. Once they inevitably go to sleep, they find themselves dreaming up a Labyrinth- a congregation of every fear.

Only by conquering their Labyrinth, will the victim be able to return home.