(DLC is required for VR compatibility)

With photos and memories from a few years ago, I set out to achieve a detailed, realistically designed recreation of the renowned Japanese shrine, Fushimi Inari Taisha. I feel like the real place has a very culturally unique significance, I personally had a great time exploring it a few years ago. I’ve designed this environment to be experienced from a first person perspective, with the aim of allowing the player to be immersed in the same kind of atmosphere as the real place. 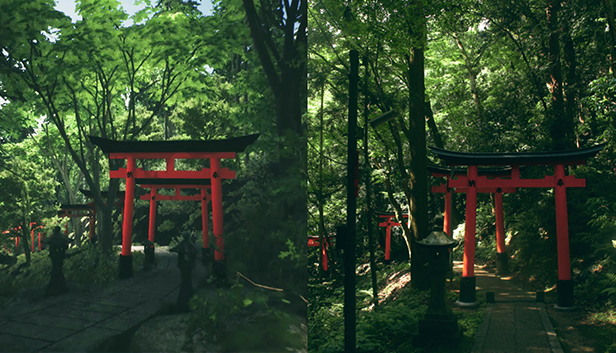 The map is very extensive to explore with shrine gates laid out over the entire mountainside. I’ve tried to include a lot of variance in different parts of the mountain, with lots of points of interest to discover and many branching/intertwining paths to encourage you to make choices with your exploration. Take photos with the in-game camera, customize the soundtrack, walk around at your own pace. Your attentiveness and eagerness to explore will be rewarded with access to hidden areas, areas that will be easily missed by a rushed player.

I hope you are able to dive into this game without much context and just enjoy being immersed in the world. Thanks for playing and for your support !