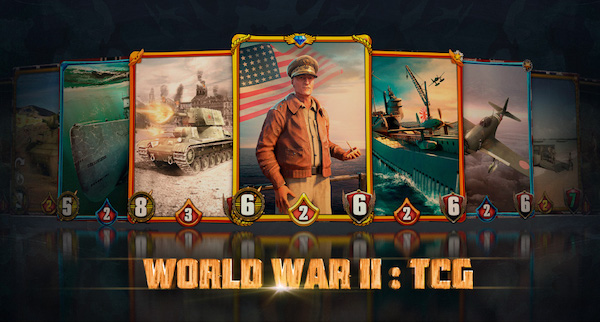 "World War II: TCG" is a free-to-play collectible card game based on the events of World War II. Create your own Army Decks with Tanks, Infantry or Aircrafts and increase your firepower with powerful weapons and strategic orders!

World War II: TCG has a single player mode consists of 190 WW2 missions starting as a soldier and progressing through different battlefields and distributed in 19 campaigns based on historical military events from World War II.

The resource system is different from other card games, and can be similar to a wargame, you have 3 action points that you can use to play cards. This mechanic gives a wargame atmosphere and creates different layers of strategy where you have plenty options from turn one.

One of the mechanics of WWII: TCG is promoting units. You can use your resources to promote the unit to be more powerful, the card starts as a simple soldier and will gain more stats and abilities while promoting.

WWII: TCG has a cross-platform multiplayer online mode where you can fight against other players on the battlefield.
Download this free to play card wargame and enjoy playing against other generals!