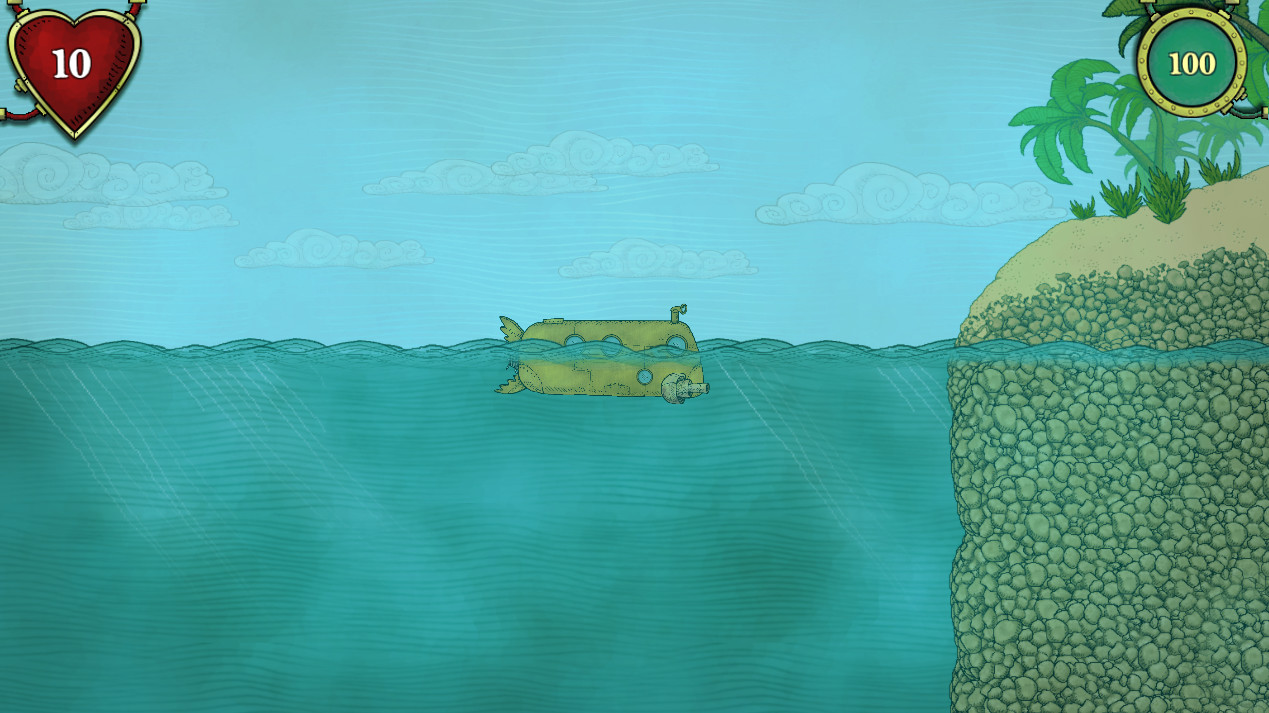 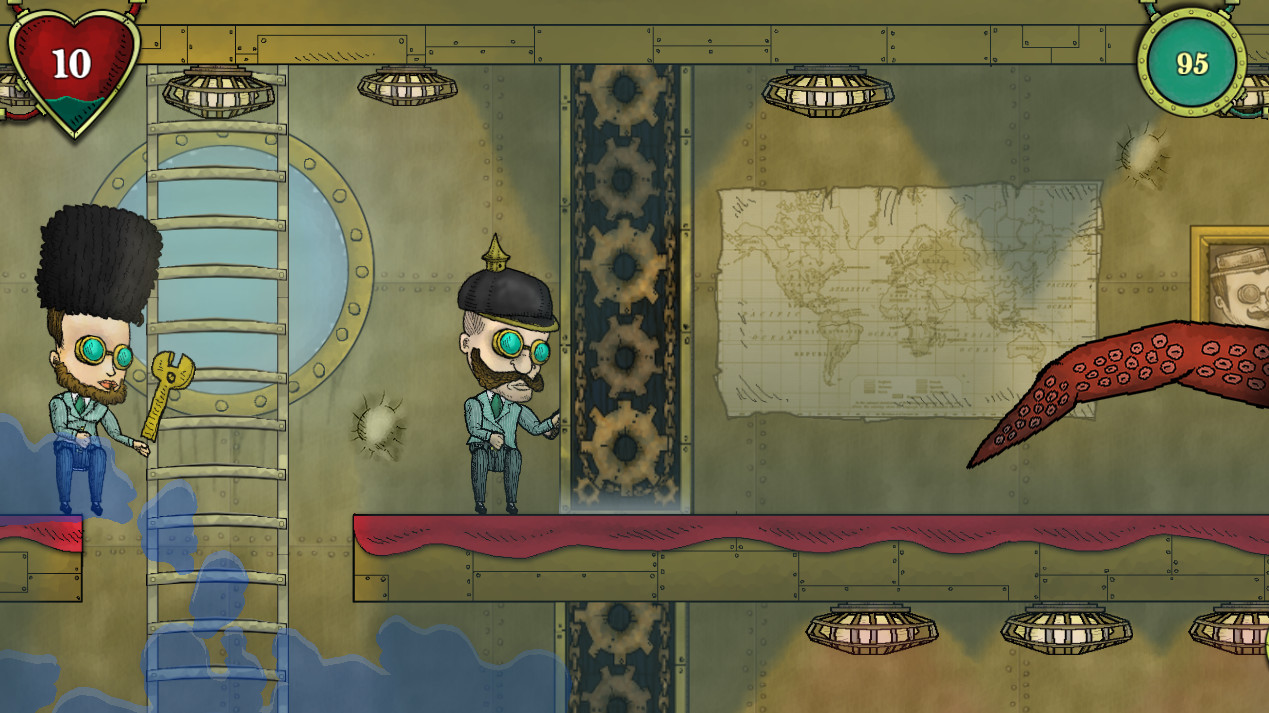 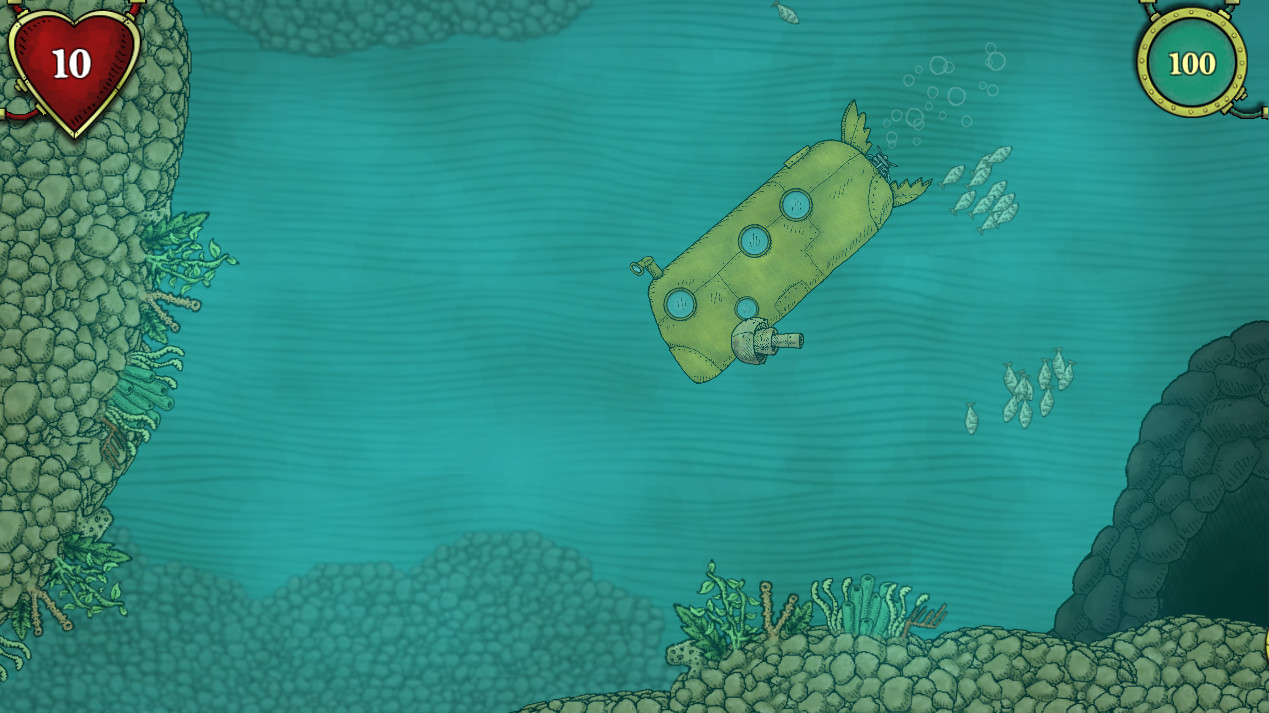 WARNING: THIS GAME IS CO-OP ONLY. BRING FRIENDS.

We Need to Go Deeper is a 2-4-player cooperative submarine roguelike set in a Verne-inspired undersea universe. In the game, you and your crew must embark on many voyages into a mysterious undersea trench known as The Living Infinite.

To be successful in your mission, you and your crew will have to work together to pilot a submarine, as only with your submersible in-tact will you be able to live to see the bottom of The Living Infinite.

Designed with human interaction in mind, We Need to Go Deeper was created to encourage friends to shout at each other. The current version features 2-4 player cooperative multiplayer- either through a Local Area Network or Online.

The Early Access version currently features a fully fledged procedural generation system that creates a new trench layout every time you take a dive, diversifying things further with 6 unique biomes and a work-in-progress "AI Dungeon Master" who alters difficulty on the fly.

Pilot and Maintain Your Submarine

Repair leaks, load torpedoes and route power to Shields, Lights, Weapons, and the Engine as you and your friends dash around the submarine on its voyage into the deep.

Leave the safety of your submarine to explore procedurally generated undersea caves, where you may come across treasure and danger in equal measure.

Choose from a variety of era-specific outfits from the 19th century to spruce up your adventurer! Non-gender-specific mustaches included.

Unlock a Variety of Tools

From repair wrenches to guns, to fish-mincing meat cleavers, a variety of tools and weapons for helping your teammates is waiting to be discovered!

A total of 10 unique biomes are planned for the full release. Each biome will come chock full of unique enemies such as alien jellyfish, volcanic tortoises, burrowing worms, and many others to better flesh out The Living Infinite’s dangerous underwater world.

A variety of large-scale boss battles are planned for each biome, each individually suited to the region they live in. These will serve as the climactic transition between biome zones.

We’re hoping to include a few Submarines to choose from in the final game, including a larger-scale sub better suited for 4-man voyages, complete with new consoles such as beds for healing, upgrade stations, leak-fixing drones, etc.

Discover mysterious undersea civilizations on your voyages who may either help or hinder you and your crew. One unique civilization is planned to inhabit each biome, along with a translator item to help players understand each civilization’s colorful languages.

We plan to continuously add interesting Tools and Weapons throughout development as we come up with new and unique items to take advantage of various play-styles and to better give players a depth of strategic options to choose from, in addition to supplying our players with plenty of items for annoying their friends with.

What’s At the Bottom?

Find out what lies at the bottom of The Living Infinite, with an end-game we hope will be both exciting and memorable!

Player of the Month

We know that buying into Early Access can often be a thankless contribution, so every month we’ll be highlighting one outstanding player as Player of the Month – where they will receive 4 free copies of We Need to Go Deeper to send to their friends, in addition to being recognized on the title screen for that month’s update. This way, we hope that those in our community who really strive to help us transform We Need to Go Deeper into the great game we want it to be will get the proper recognition – and reward – that they deserve.

While we won’t always have time to respond to every suggestion or request, we will try and keep the Steam forums an active place for discussion, and promise to keep an active eye on what topics the community is most passionate about.

Twice a month, we’ll also be hosting a live hang-out stream, where anyone can pop in and chat with us developers about, well, whatever you wanna talk about! In the interest of narrowing the divide between Gamers and Developers, we’re gonna try and just have some good old fashioned social time with our fans. We’ll try to host these on weekends so everyone can come by and play games, watch movies, and generally shoot the breeze with us, in addition to talking about We Need to Go Deeper’s development if ya’ll fancy it.

"It’s rare to find something genuinely fresh in a roguelike… but We Need to Go Deeper is the rare example of a RL that grabbed my attention out of left-field." – PC Gamer

"Gosh, I think I love it already." – PCGamesN

"It boasts a lovely, unique art style that looks something like big-headed Edward Gorey drawings, and the game’s concept is just plain cool." – Indie Statik

"It’s easy to tell they truly care about providing a new type of experience with We Need to go Deeper." – Go! Indie Beat