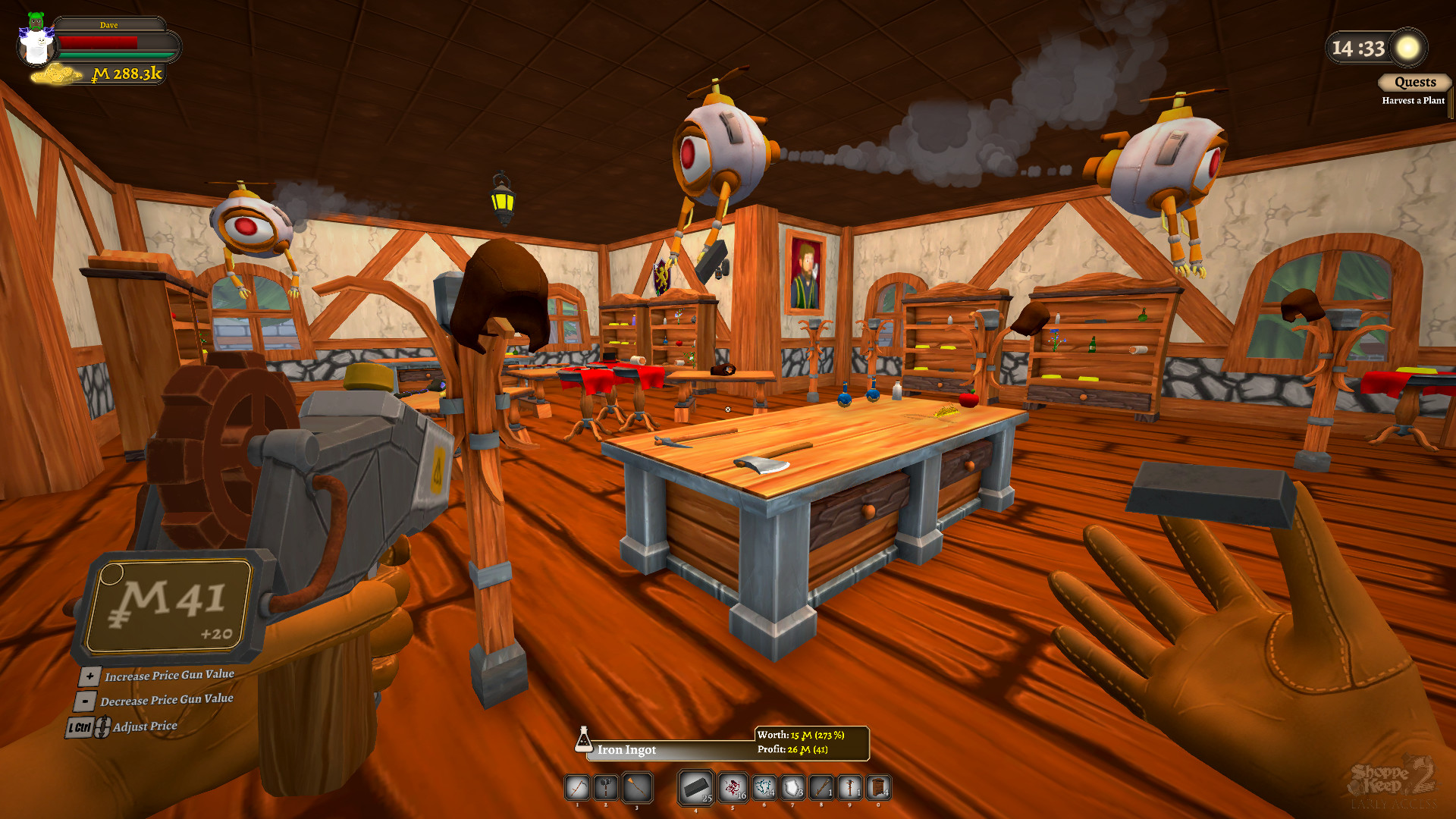 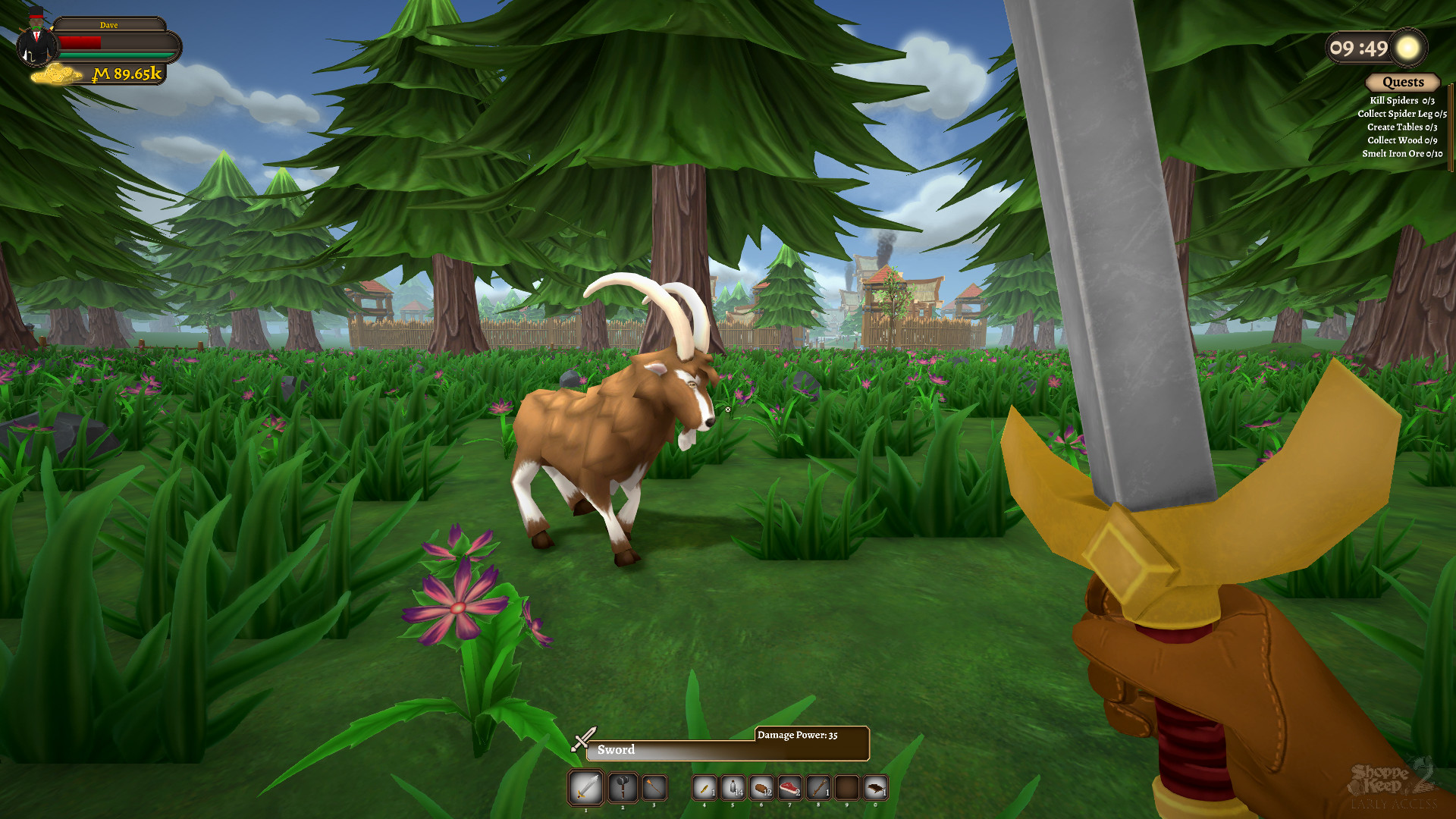 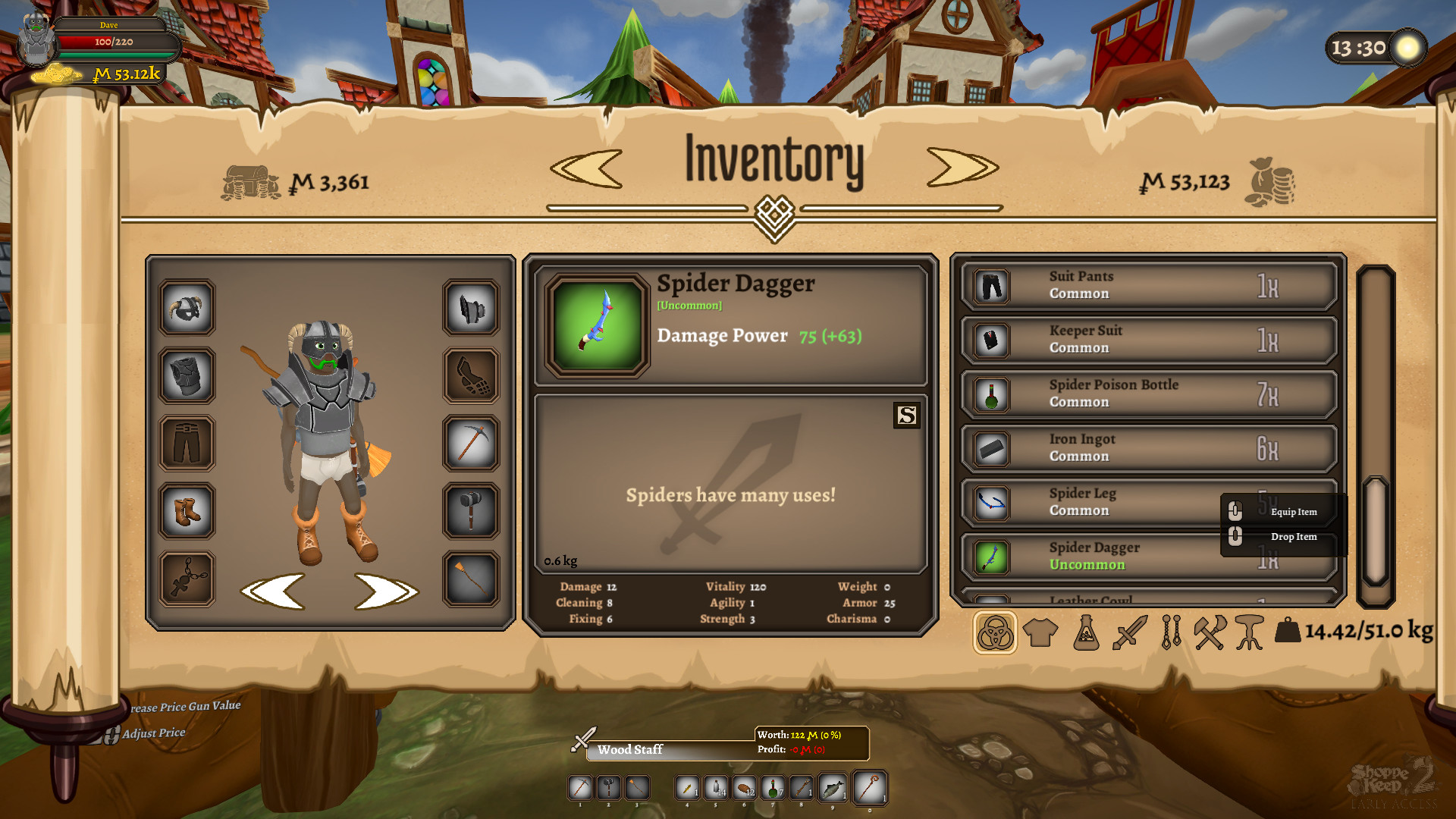 Welcome to the world of Shoppe Keep 2, Customerania – a whimsical open world surrounded by rolling countryside, packed full of quaint little houses, six foot spiders, voracious wolves, angry mobs and of course your new Shoppe. Shoppe Keep 2 is a single player and multiplayer enhanced merchant simulator, inspired by the NPCs we know and love from classic RPGs and MMOs. While adventurers and rogues are out slaying dangerous beasts and selling an alarming amount of stolen plates, cheese and bread, it’s you, our trusty merchant who is keeping their shelves stocked.

In Shoppe Keep 2, you choose how you want to conduct business. Purchase your stock from several suppliers around town or take on lucrative and dangerous missions to secure high quality stock that will fetch higher prices and profits. Close your Shoppe and explore the town, forest, and maybe even a cave or two – and battle dangerous enemies to gain sweet loot to stock your shelves!

It’s not easy running a Shoppe in a land where laws and regulations are non-existent. You’re under constant threat from ‘sticky fingered’ patrons, and to top it off there’s a barbarian camp on the outskirts of town constantly threatening the townsfolk with attack. But you can play your part by equipping yourself with swords, bows and staffs to fend off any skirmishes.

On the more traditional side of Shoppe Keeping, you’ll be ordering, displaying, pricing and selling stock, such as weapons and armour. An intelligent AI system means that customers will respond to your pricing, class of items and more. Should you try to extract too much money from your customers, they may turn to thievery!

Can you rise from zero to well-coined hero? Have you got what it takes to run a profitable business amidst the chaos of Customerania?

A first for the franchise, Shoppe Keep 2 gives you the ability to play with friends, in four-player online co-op! Manage a complex store together with several players, and share your love of retail. You’ll also be able to flaunt cosmetic items you find while exploring, making your friends envious. Share the responsibility and riches!

If you want to play by yourself, instead, that’s fine too! Shoppe Keep 2 provides endless entertainment in single player mode that will allow you to run your Shoppe without pesky friends to argue with, spoil your Shoppe’s décor and reduce profits.

A Town of Change

While your Shoppe grows and evolves, so will the town around you. There may be high-level warriors looking for a good deal on powerful swords, but the environment will also change to reflect the new level of wealth that your town has secured via a successful Shoppe.

A changing economy affected by players

Just filed a big order of health potions? Chances are that you have oversaturated the market and the value of these items is now at an all-time low! Shoppe Keep 2 has an optional mechanic which tracks in-game stock that players all over the world are selling, and sends the info to our server. This information will be used to adjust in-game item demand, mark-ups that customers will find acceptable and more! It is our intention that this info will also be used to craft seasonal events and unique rewards for players.

Wear it All or Bare it All!

Not only will you stock hundreds of items, but you’ll also be able to use every single one of them yourself, each with varying stats. Equip yourself with swords, bows, maces and wizard staffs while donning various armour sets. With the brand new open world, there will be much more adventure to embark upon and more combat to engage in.

Shoppe Keep 2 also features an expanded character creator, allowing you to customise your Shoppe Keeper. Don’t be afraid to express yourself – the custom Shoppe Keeper editor allows you to choose skin tone, gender, hairstyle, eye colour and perhaps even add a spiffing beard.

And if you’re looking for something more permanent than a change of hairstyle, how about a tattoo? Choose from a wide range – from street-cred-boosting skulls to poop: who could resist that…?

Make sure to add the game to your Steam wishlist now to keep up to date with news! We will see you all on 26th April 2018, when the retail mayhem will begin once again!