Turn based strategy. Explosions. A diverse cast of gelatinous characters.

Powargrid is a turn-based strategy game that plays like a board game… with explosions!

Destroy your opponent’s power plants and protect your own. Strike a balance between attacking, defending, and building your economy to control the board. Blast your opponent with shockwave towers or strike them from afar with the lightning cannon. Construct additional power plants to boost your power economy and extend your reach with substations. Is the situation looking exceedingly grim? Overcharge your power plants for a last ditch defense or a surprise attack! 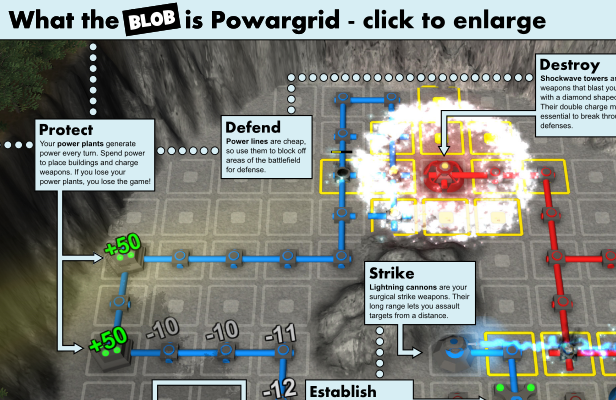 In the story driven campaign, you will take on rival factions as a recruit in the Blue Blobbie army. Get shouted at by your lovable Commander Grak, face down Hero Archeologist Ford of the Red Blobbies, take on the mad green Zealot Zomg, and thwart the schemes of Chairman Swap of the Grand Yellow Blobbie Corporation. And rumors say that’s not all…

Powargrid also features online and hotseat multiplayer, and skirmish battles against computer opponents. Difficulty can be set from "fair" to "let us know if you win because we sure can’t."